Working with our environment

Working with our environment

Hello everyone !
I know the online courses autonomous work is over, but I have read a second course and I wanted to post it. As I said for my first course, I prefer to read entirely before posting because sometimes it is not enough interesting and I don’t learn things each time I read. So I summarize all the course at the end !

This new course is about “Working with our environment”, a subject which seems really interesting and very important nowadays.

The main subject of this course is to deal between environment and technology. People use technology depending on their wants and their needs. But inevitably the use of the materials needed for the technology change the environment.

First, what is environment ?
We talk here about “natural environment” (not social or political environment). It is the physical and biological world which we and all living things inhabit, interact and share. Then the text ask another question : What exactly do we mean by natural ?

We leave in a material world, but we are part of nature, because to leave and to do any kind of things in our lives we need the nature, as the following picture shows : 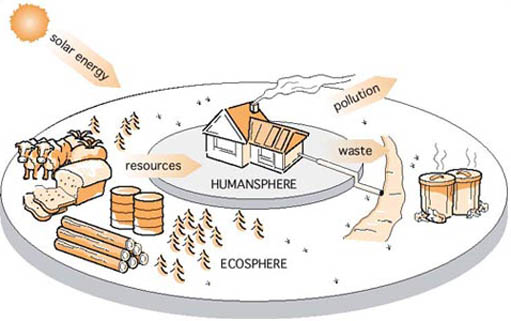 We use the natural resources to create our “human sphere” with all our needs. The nature then absorbs our waste, and provides climate stabilization.
Humans need more and more resources so they modify all the landscapes for their occupation and the agriculture. Some parts are still wild and not exploited by humans but without meaning it there are also affected by our activities. Those activities affect all the ecosystems.
Now there are a lot of environmental issues :
The global climate change, the ozone layer is still threated, there is a loss of natural habitats for animals, a destruction of the tropical forests, a big loss of biodiversity, and the depletion of vital natural resources such as gas and oil.
There are also issues concerning directly the humans, such as noise, air pollution, certain farming practices, the restricted access of some areas, which are protected to save the ecosystems which live there.
Not all the people on earth have an access to clean water, or good food as much as they want.
Even if those issues do not directly affect you, you may think about solutions as well, like energy saving or recycling.

Then the text use some study cases to talk about environment and technology, and I must say I’m disappointed because it’s not the most interesting subject in the world. The main topic of the study cases is the refrigerators.
Inside the refrigerators, there is a gas, called freons. It is non-toxic, non-flammable and non-reactive, so what could be the problem with it ? That gas is part of a global group of gas called CFCs. The CFCs are so stable that they last a long time in the atmosphere, and are able to reach the stratosphere, where they react with UV radiation. There are serious greenhouse gas.

The second study case is the refrigerators linked directly with climate change.
We know now for years that the extraction, transport and consumption of fossil fuels (coal, oil) are damaging the environment.
What about the refrigerators in the Us in the 1950s, 1960s ?
In those years, the electricity became cheaper, so the design of refrigerators changed. The refrigerators makers made the insulation thinner so they could make the inside of the refrigerators bigger without making the outside bigger. The compressors were inefficient, the doors were not well sealed. Because of the thin insulation, the outer surface of the box was “sweating” with condensation, so they added electric heaters to dry it. So all of this made that the cold was going outside and the heat inside, so they made it colder, but the inside was freezing, so they also put heaters inside, with inefficient lights. All of this was using a lot of electricity.
In 1972 in the US, the average energy consumption of one liter of cold space was 3.36kWh a year. Then, because of the “oil shock”, the attitudes of energy use changed. The government introduced energy standards. The manufacturers agreed to reduce the standard for cold space to 0.86kWh by 1998. But the time of replacement is about 15 years in average, so there is a delay between the introduction of the standards, and the real reduction of the consumption. At the end of 1980s, the refrigerators were still consuming a sixth of the household electricity.

In 1998, the UK Department of Trade and Industry identifies four main sectors in the energy consumption : the households, the industry, the services and the transport. In 2003, the domestic sector accounted for 31%. 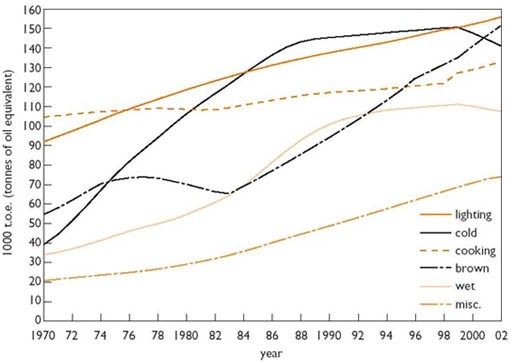 Then it talks about the global warming and the climate change. They use scientific vocabulary to explain the greenhouse gas permit to warm the earth, or the temperature would be colder. But there are now too much greenhouse gas. Currently, the temperature is rising, and is now 0.7°C higher than 100 years ago.
The consequences of this are the natural disasters, which drive to huge human and money loss.
One of the reason of why is it hard to reduce our impact is that the greenhouse gas stay hundreds of years in the atmosphere.

Then the text comes back again on the beginning of food refrigeration, in New Zealand, and how we can linked it to the diminution of the “kea”, a bird. 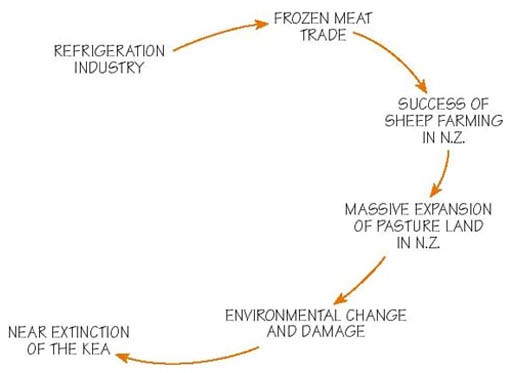 Definitions of sustainable development :
¬“Sustainable development is development that meets the needs of the present without compromising the ability of future generations to meet their own needs.”
Gro Harlem Brundtland, 1987
He explains more by adding :
“The concept of human needs, in particular the essential needs of the world's poor, to which overriding priority should be given; and the idea of limitations imposed by the state of technology and social organization on the environment's ability to meet present and future needs.”

“To promote development that enhances the natural and built environment in ways that are compatible with:
• The requirement to conserve, even increase overall the stock of natural assets
• The need to avoid damaging the regenerative capacity of the world's natural ecosystems
• The need to achieve greater social equality
• The avoidance of passing additional costs and risks to succeeding generations.”
(A. Blowers, 1993)
The scale and range of environmental problems we face are daunting, but, as Case Study 1 has shown, problems can be addressed and harm can be reduced, hopefully to safe levels. Technology can and should be used for sustainable development.

It’s now the end of this course. I think I haven’t learnt anything new, it was not what I expected from the title, and talking about refrigerators is not the most interesting thing for me. I am disappointed, because I was hoping something better.
If we had to continue the online courses for our autonomous work I would choose the course “Language in the real world”, but the two first courses were not was I expected so I prefer not to read it, and I will maybe read a book in English that I have at home and I have never the time to read it, so it is the good opportunity.